Manchester United bow to Arsenal at Old Trafford for the first time since September 2006
– Pierre-Emerick Aubameyang scored the only goal that separated the two sides after the regulation period
– The Red Devils have equally lost all three home games in the EPL since the 2020-21 season kicked off
Pierre-Emerick Aubameyang’s second-half goal in the 69th minute was all Arsenal needed to claim their first Premier League victory at Old Trafford since September 17, 2006.
The 31-year-old fired the North Londoners to victory from the penalty spot after Paul Pogba fouled Hector Bellerin in his danger zone.
Brazilian forward Willian started the move from the right-wing who tried to break into the 18-yard box but was prevented before threading a pass to his teammate and the move earned them a chance at goal. 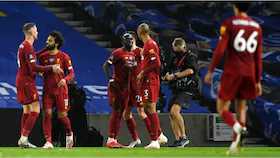 The visitors continued to create more chances but none of them was good enough to help them find the back of the net.
With one minute left to play in the opening half, Bellerin sent a stunning curling cross into the heart of the defence but Saka’s header from the centre of the box goes a whisker over the bar.
The game resumed with both teams looking for their first goal of the game but neither could pull that up in the early minutes of the second half.